Taken from The Star:

For oil platform workers off Terengganu, work must go on
By NURBAITI HAMDAN

TERENGGANU: For most people, the Hari Raya holidays are the time to spend with family and friends.

But for a group of workers, the end of the fasting month will have to be marked some 240km off the Terengganu shore in the middle of the South China Sea.

They are the staff of Exxon- Mobil’s Lawit A oil platform who are tasked with ensuring that petroleum production is not disrupted.

Operations supervisor Jawead Allahrakha, 50, said whatever happens, the work must go on. 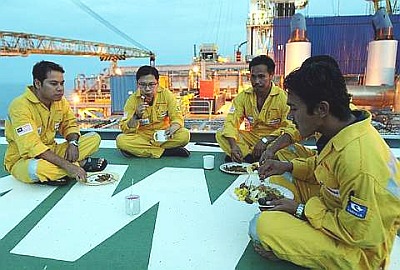 “We are sacrificing our Hari Raya so that other people in the country can celebrate,” he said, adding that 90% of the 81 platform crew are Muslims.

He will be one of 45 people who will spend the first day of Hari Raya on the oil platform.

The rest were lucky enough to get leave to celebrate at home.

Chef Hanizul Hamzah, tasked with feeding those on the platform, said a sense of duty makes him carry on.

Hanizul has never celebrated Hari Raya at home since he started working at the platform in 1999. But this year, he hopes he would be home in Kota Baru for the festivities.

“Being able to serve the crew with the best meals I could cook makes it all worth it.

His main concern at the moment was making sure there was lemang and ketupat for the crew as it would just not be Hari Raya without these favourites.

For maintenance worker Sulaiman Samsudin, 55, the platform has become a second home.

“I have celebrated Hari Raya 12 times here. It was hard initially to be so far away from my family in Perak,” said Sulaiman.

He said some of the younger crew members would lock themselves in their rooms because they were too sad.

“But this is life at the platform. Being one of the seniors here, I would talk to them and try to make them feel better,” he said, describing the crew as his ‘family.’

“The important thing is not to be alone. You need to keep yourself occupied,” he said,

Nazman said he would also re-enact the first morning of Hari Raya once he got back home onshore, even if it was the 15th day.

“With the decorations still hanging and food served, my wife and I would treat the day as if it was the first day of Aidilfitri,” he said.

(Did I mention I was part of the Lawit Design team?)

This entry was posted on Tuesday, September 23rd, 2008 at 6:00 am and is filed under engineering, Malaysia, oil and gas. You can follow any responses to this entry through the RSS 2.0 feed. You can leave a response, or trackback from your own site.